This Blog is designed to provide the reader with information on how to adopt technology into the classroom by relooking at traditional classroom tools and transitioning into new ways of teaching and learning. The Digital Sandbox explores the future of learning through the recreation of 21st Century learning environments.

"A New Kind of Backpack"

This school year, Dodge City Middle School students will experience a new kind of Backpack, a Digital Backpack.
Mike King, Principal of Dodge City Middle school, is starting the new school year with a few digital incentives to get parents and students informed about school events.  This year, he has added to the school website, three new communication tools that he hopes will help parents become more involved in school and school activities. As he starts his fourth year as principal, he will continue to do the things he has in the past: Mass e-mails throughout the district with information on school events in the form of an online newsletter and post up to date information in the parent access portal.  But this year he wants to do even more with technology and communicating with the community. The first addition to the website comes in the form of a "Digital Backpack." 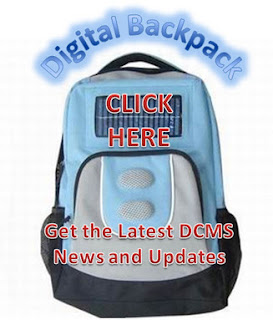 When members of the community access the school's website the Digital Backpack is not hard to miss.  An image of a student's backpack  provides a direct link to the site. Middle School Principal, Mike King, states that his plans for the digital backpack, "is to make it easy for parents to access and download important forms, notes, and up to date news."
The Digital Backpack already contains important back to school and athletic forms in both English and Spanish for parents to download. Anyone who has access to a home/work computer  and printer can easily access these forms without having to drive to the school or call the school office. Parents simply print out the form they need, sign, and the student delivers it to the school office. Also located on the website's Digital Backpack page is "Pod Central." This is where parents, students and community members can have access to digital recordings of upcoming school events or monthly news.
"A podcast is like a radio newscast which can easily be uploaded to a mobile device like a cell phone, iPod/iPad, or just simply played from the Digital Backpack website. It's like an mp3 that students download from their favorite music site. The only differences is that instead of playing music, it plays an audio cast of various school events that demonstrate school pride and general information," states Principal Mike King.
What he hopes will happen is that the students will take an interest in becoming podcasters themselves creating a whole new station of student related news. Currently the DCMS Pod Central is audio cast in both English and Spanish with the hopes of outreaching to the Hispanic community.
One of the biggest hurdles he will face is getting the information out to the public and making the public aware of new posting or audio cast . To make the public aware of what is new on the digital backpack and pod central he has taken one more additional step, he has opened up a school twitter account.
What is Twitter? According to Wikipedia, the free on-line encyclopedia: "Twitter is a free social networking and micro-blogging service that enables its users to send and read messages known as tweets. Tweets are text-based posts of up to 140 characters displayed on the author's profile page and delivered to the author's subscribers who are known as followers. Senders can restrict delivery to those in their circle of friends or, by default, allow open access. Users can send and receive tweets via the Twitter Web site, Short Message Service (SMS) or external applications. While the service costs nothing to use, accessing it through SMS may incur phone service provider fees."
Principal Mike King hopes he can provide more outreach to parents and the community with the Twitter site. He also plans to "Tweet" (send instant messages) to all subscribers of the DCMS twitter account each time new updates occur to the digital backpack site. The instant messaging site is now available for parents or community members who are interested in participating in the instant messaging "Twitter" service.  Mike King concluded that, "The best part about all of this new open source software technology is that it is free, there is no additional cost to the community."
Posted by Digitalsandbox at 5:16 AM